Be open to opportunities you never imagined – even in retirement 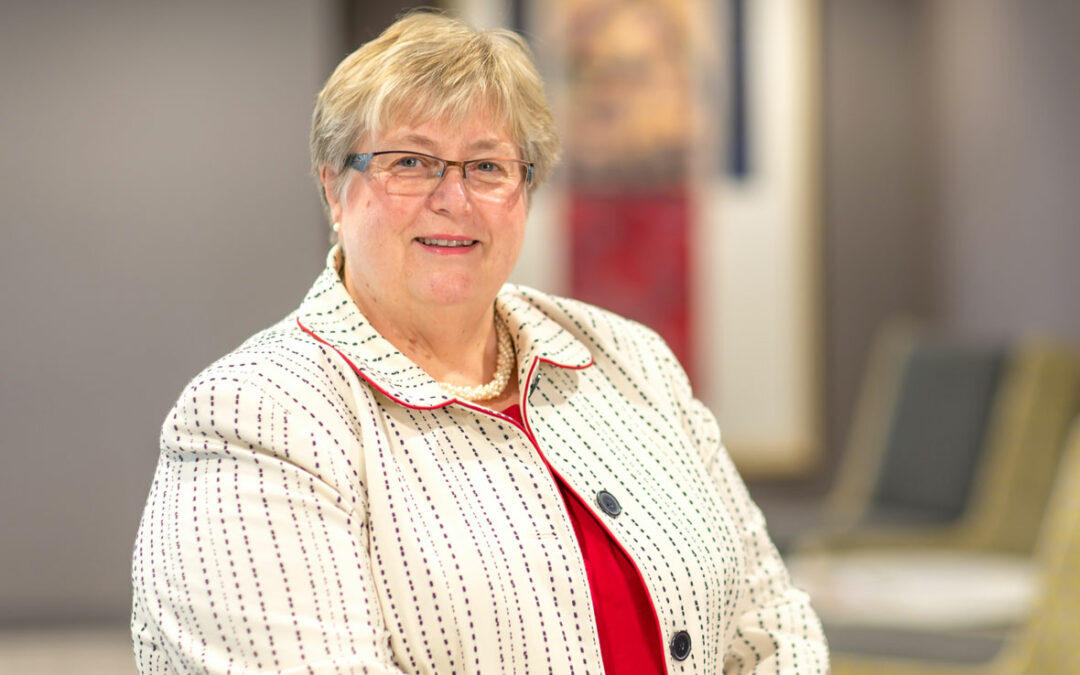 At the end of 2020, and after 32 years at Lommen Abdo, I retired from the practice of law! I will remain as “of counsel” to help where needed, primarily in bankruptcy litigation. My life has been an amazing journey from the grade school girl who dreamed of being a lawyer! My love for the challenges of crafting the best legal arguments for my clients has never faded. I have been blessed to work with an amazing group of people at Lommen Abdo. I remember going to the Lommen Nelson client holiday party in 1987, just before I officially started, and thinking that the firm was a lot like the Mary Tyler Moore show. Lots of camaraderie, a few real characters, people enjoying coming to work . . . but everyone with an underlying sense of providing excellent work on our clients’ behalf.

I have been blessed to have a number of amazing mentors in my life – all who entered at the right moments even when I didn’t know I needed them. My teachers in the Eveleth public schools were excellent and I was encouraged to pursue my dreams by them. Some of my aunts thought I should become a home ec teacher! I love to bake and sew and do some crafts, but I would have been a lousy teacher. When I went off to the University of Minnesota, Duluth (because I was too nervous to go as far away as Drake in Iowa, my other college option!), I thought I’d get an English degree and move on to law school. Enter Professor Dan Johnson. When I signed up for Professor Dan Johnson’s Television 101 I thought we would watch and critique tv shows. I had no idea we would be making television shows! Eric Eskola was in my television and radio classes – until he got kicked out of the television class by Professor Johnson. I meekly asked to drop the class as it wasn’t what I expected. The answer was no. So I learned how to create a television show! Wow – what an amazing process. It turned out I loved the whole planning and producing process of television! As my senior project, I produced a 30-minute show that aired on public television on the destruction caused by Dutch Elm Disease along London Road in Duluth and the change of the historic street. Dan Johnson showed me I could do more than I thought I could if I planned and really worked at it – and if I loved what I was doing.

But, as much as I loved my television education, that wasn’t meant to be my vocation. I loved politics, too. And completed my last quarter of college down at the Minnesota Legislature, interning for credit for Rep. Jim Ulland (R-Duluth). Wendell Anderson was governor back then and there were only 31 Republicans in the Minnesota House of Representatives. Politics was the art of (and arm-twisting to) compromise back then. I was a sponge and soaked in so much of what happened in our state government. After the session ended, I worked briefly for the St. Paul mayor and then did the communications for a 2nd district Congressional race. Another eye opening experience on campaigning! But I didn’t want to work fulltime in politics either.

So I accepted a job as a photographer for the Mesabi Daily News in Virginia, Minnesota. I had also found a passion for photography at UMD. Working in a dark room every day and taking pictures of my home area was a truly life changing experience. I saw things through different perspectives. It was a different time then: I remember the Duluth Camera Exchange lending me a much fancier camera than my own to use to photograph President Carter when he came to Duluth. Just handing me the camera. No paperwork. Just trust. I eventually became the news editor at the Mesabi Daily News. This was when Congress was deciding whether to create the Boundary Waters Canoe Area. Passions flared on both sides of the issue and I saw Sigurd Olson burned in effigy on a regular basis. I also was privileged to fly into the Boundary Waters on a Forest Service plane with the Congressional delegation, including Sen. Muriel Humphrey, to see what they were considering and hear their thoughts when they saw the beauty or that area. Landing on the belly of a plane wasn’t so terrifying, but I still recall the feeling of worrying that we weren’t going to lift off the water and clear the trees on the shore to take off! So many local people did not want Congress telling them whether they could use a motor on the land and lakes their families had used for decades. So many others wanted to protect the pristine land for future generations to cherish, too. It was uneasy times between neighbors and friends in Northern Minnesota then. I’m glad I was able to record the events leading to the preservation of the BWCA.

Rudy Perpich became governor right when I became the news editor of the Mesabi Daily News. We became great friends and shared some moments that are among the highlights of my life. After I left the Mesabi Daily News to run a fledgling drug abuse prevention program for four Range cities and schools (the Quad City Drug Commission) and Rudy lost the gubernatorial election and moved to Vienna, Rudy and I maintained our friendship. When he decided to return and run for office, I was one of the people in a garage in Hibbing saying “we can do this.” I worked on his campaign till August 1982, when I finally went to law school. The night of the primary is one I’ll never forget. Rudy was challenging Rep. Don Fraser for the Minnesota governorship. Rudy was up on the Range for the evening – his wife and daughter having voted absentee and were out of town. I was in St. Paul attending law school. With the Twin Cities election results coming in fast and furious, early in the night, Rudy was far behind in the vote. He left his campaign party and went to bed. He called me the next morning and said “I won!” He apparently didn’t know until he turned on the radio as he was shaving the next morning and heard it on the news! He said he was coming down to celebrate and I met up with him and many of his political gurus at the old Café Di Napoli on Hennepin Avenue. Rudy held court that night and the food and liquor just kept coming – along with story after story these folks had experienced over the years in politics! I remember polkaing with Rudy at his inaugural that January! I was at William Mitchell College of Law and got to visit him on occasion and would run into him at the fair or other celebration. He was an amazing man who taught me to throw your all into something you really want and that you believe in. People may call you goofy, but if you believe in it, do it. Rudy Perpich had a profound impact on my life and I try to live with his enthusiasm and commitment each day.

Law school was not what I expected in to be. I worked during the day and went to class at night from 6:30 to 10:30 three week nights, with one week night off and one an early night just to 8:30! My close classmates talked me out of quitting in my first year. Graduating in January of 1986, I took a job as a litigation associate at Hanft Friede in Duluth. Excellent firm. Great people! But, after all that, I found I missed the Twin Cities. I was given the opportunity to join Lommen Nelson in January 1988. I found more mentors, John Lommen and Phil Cole, and a group of people I can’t imagine not having in my life. John taught me to act with confidence even if I wasn’t feeling confident – and never let anyone know you had a doubt. Phil Cole demanded excellence, always putting the client first. You could never rest on “that’s how it’s done.” He was innovative and cutting edge. I loved the challenges of practicing law and solving legal puzzles as well as finding ways for the firm to work better. He taught me well and I took on more of the management and marketing in 1998 and split my time between the practice and management for the rest of my career of 32 years. I’d finally found what I was going to be when I grew up! And a truly amazing group of clients and colleagues to share the practice of law.

And at Lommen Abdo I found a friend and travel partner in Kay Hunt, who asked me one day early in my Lommen Abdo career, if I’d ever want to go to Europe. I said “sure” as I went into a deposition and when I came out, we were pretty much booked! I thought that trip to London, Brugge and Paris was the trip of a lifetime and I’d never to be back. I am so glad I was so wrong. Another instance of not even imagining the places I’ve been able to go! So many places from my history books. If I’d told someone in Eveleth when I was growing up that I was going to go there, we would have laughed. I love travel and the pandemic has been doubly hard because I cannot see the people I want to see and I cannot travel! But I’ll get to do both again.

Being an attorney also introduced me to organizations I did not know of and gave me an opportunity to give back. As a member of Leadership Minneapolis (a fabulous Chamber of Commerce Program), I got to know the work of Hope Community and help build a playground in their very early days of rebuilding their Franklin Avenue community. I helped found the Executive Women’s Council of the Chamber and served on its steering committee for years. And I began to volunteer for Jeremiah Program, a program where single moms and their children can transition from poverty to prosperity two generations at a time. I now co-chair of the Fundraising Committee and I am a member of the Minneapolis St. Paul Community Board of Trustees.

Without my early educators and people like Dan Johnson, Rudy Perpich, John Lommen and Phil Cole, I’m not sure what direction my life would have taken. All of these people believed in me more than I believed in myself when I first met them. But they all possessed the ability to instill in you the confidence and the work ethic to get things done – and done well. I am so grateful for those people. I have had a wonderful career filled with opportunities I never even knew enough to dream about! I had the privilege to serve great clients and work with folks who cared about those clients and each other. Because of all this, I go forward into retirement knowing I have to keep my mind open to new possibilities as well as seeking opportunities to return the mentoring I received for those that follow. Retirement is not an end, but the start of a new adventure! Looking back on what I’ve done, I’m very excited about what is still to come!