THE PARTIES: Mark Rutkoske and Felix Rutkoske are brothers who engaged in a farming operation through various business entities on land leased by Browning Creek, LLC, a limited liability company, also owned by the brothers. The Commissioner of Internal Revenue is the head of the Internal Revenue Service, an agency within the United States Department of Treasury.

THE FACTS: In 2009, the brothers, through Browning Creek, LLC (hereafter “Company”), conveyed a conservation easement restricting the development of a 355-acre tract of land to Eastern Shore Land Conservancy, Inc. (the “Charity”). The Charity purchased the conservation easement below the land’s fair market value, which resulted in a non-cash charitable contribution of $1,504,960. That same day, the brothers sold their remaining interest in the property. As a result of these transactions, each brother earned approximately $800,000 in gross income. To offset their potential tax burden, the brothers each claimed a noncash charitable deduction in the amount of $667,520 for their share of the Company’s contribution of the conservation easement.

LEGAL ISSUES: In carving out a special charitable deduction for conservation easements under IRC § 170(b)(1)(E), Congress limited the deduction to “qualified farmers and ranchers” whose gross income from the “trade or business of farming” is more than fifty percent of their gross income. At trial, the Commissioner asserted that the brothers were not “qualified farmers” entitled to deduct 100% of the donation because the majority of their income that year came from the sale of real estate. The brothers argued that the sale of a farm asset constitutes income from the business of farming.

CONCLUSIONS: The court held that the brothers were not qualified farmers under Section 170 of the Internal Revenue Code and that they were not entitled to a full deduction of the contribution. According to the court, neither the sale of real property nor the sale of development rights results in income from a farming activity. The fact that the brothers invested most of the proceeds in their farming operation did not matter. As a practical matter, farmers looking to donate a charitable conservation easement may lose out on the associated tax benefits if they sell a portion of their property in the same year. The brothers were also disqualified from deducting the full value of the charitable contribution because the brothers made the donation through their company, which was engaged in the business of leasing real estate and not farming.

Read the full article which discusses these additional cases: 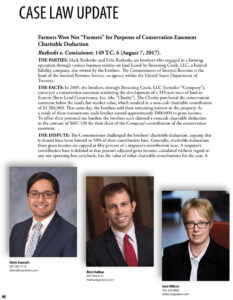