While obtaining a new survey of farmland may appear on its face to be a simple process, it can result in confusion or dispute as to the true location of your property’s boundaries. This article provides a general overview of the original surveying of Minnesota, problems that may arise upon obtaining a new survey, and what you can do to resolve a boundary line dispute.

History of the PLSS in Minnesota

With the Land Ordinance Act of 1785, the United States adopted a rectangular, coordinate-based survey system, known as the Public Land Survey System (“PLSS”) that divided land into grid-shaped townships and sections. In Minnesota, original PLSS plats were created during the first government land survey conducted by the U.S. Surveyor General’s Office between 1848 and 1907. The initial surveys were conducted in anticipation of the state subdividing the land for sale to settlers. With such surveys, it was easier to locate and legally describe the parcels being purchased. State land survey plats serve as the official legal land records for Minnesota, with all land titles and descriptions originating with the PLSS survey.

In a PLSS survey, the land is first divided into Public Survey Townships (which are different than political townships) by using two controlling survey lines: a baseline that runs east-west and a principal meridian that runs north-south. All distances and bearings are made from the meridians and baselines. Each such township is assigned a number, measures six miles square, and is comprised of 36 sections. Each section has an area of one square mile, or 640 acres. Sections are numbered from 1 to 36 and are labeled in a switchback pattern. Each section can then be divided into four quarters (NW, NE, SE and SE), with each quarter being 160 acres. Each quarter can then be further subdivided (ex, NW1/4NW1/4). Section corners and section quarter-corners were marked by posts or other monuments.

Read the full article which covers these additional topics: 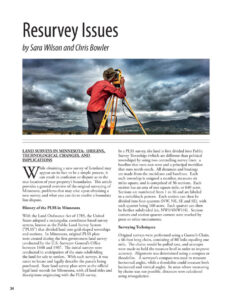